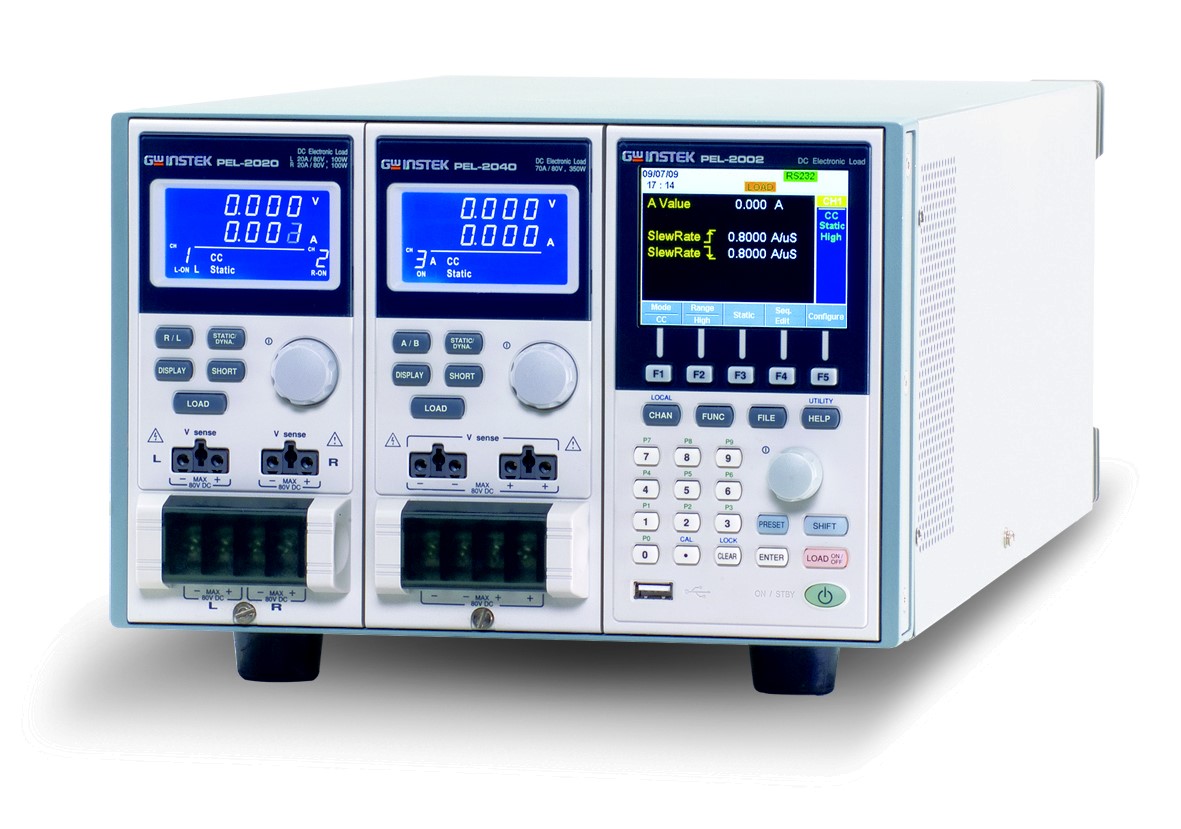 The PEL-2004 and PEL-2002 are multiple channel, programmable DC electronic loads with a modularized structure. The PEL-2000 Series is designed to meet the continuing shift toward high speed operation in today's semiconductor market. As the power supply units, DC-DC converters, and batteries that drive semiconductor circuits to follow this shift, power supply design, quality inspection, and characteristic certification using high-speed performance loads have become necessary. The PEL-2000 Series includes two types of mainframes and 4 types of load modules to accommodate users' requirements in a flexible manner. Any load module combination can be used with a mainframe to tailor a test system based on the number of channels, and the maximum load power, voltage and current of each channel. Multiple loads can be connected in parallel to provide a higher-power load to test higher power supply outputs. This flexibility significantly reduces the investment needed for future projects that have different power requirements. The PEL-2004 is a 4-slot mainframe with a master control unit to hold 4 load modules, while PEL-2002 is a 2-slot mainframe with master control unit to hold 2 load modules. When the PEL-2004 is configured with 4 load modules rated at 350W each, the PEL-2000 series is able to sink up to 1.4kVA of power.

For higher load capacities, mainframes can be linked together in parallel with standard MIL 20-pin connectors. A maximum of 5 mainframes, including one master and 4 slaves can be chained together to create a total load capacity of 7kW for high current and high power applications. Using 4 dual channel load modules, the PEL-2004 is able to test 8 power supply outputs simultaneously. The Sequence function allows each channel to change its load sink according to a predefined sequence at a rate of up to 100 s per step. Each sequence is able to run concurrently under the control of one clock. This is one of the most powerful features of the PEL-2000 Series as it is able to realistically simulate a multi-output power supply load. Under Dynamic mode, the load current or load resistance pulses between two preset levels at a pre-defined speed up to 25 s per step. This is often used as the standard test procedure to verify the response of a power supply to quick load changes. Most remarkably, multiple load channels can be connected in parallel to run Dynamic tests synchronously under a single clock. This Parallel Dynamic functionality gives the flexibility to perform dynamic tests for a high-power power supply without the need of another high-power load.

The PEL-2000 Series includes a number of protection modes: Over Current Protection (OCP), Over Voltage Protection (OVP), Over Power Protection (OPP), Reverse Voltage Protection (RVP), and Under Voltage Protection(UVP). The protection modes are useful to protect both the load modules and the DUT(s). A buzzer can be set when a protection setting has been tripped. When a protection mode has been tripped, the load unit will display an alarm and stop sinking current/voltage. When a load unit is operating in CR or CV mode, the unit may need Over Current Protection to prevent excessive current being sunk. Over Current Protection stops the load from sinking more current than its recommended limit and prevents the load from burn-out damage. Over Voltage Protection is used to limit the amount of voltage sink. If the OVP trips, the PEL-Series load will stop sinking voltage. Over Power Protection is used when the input power exceeds the specifications of the load. When OPP is tripped, the power will cease to be sunk. Reverse Voltage Protection prevents reverse voltage damage to the PEL-2000 Series up to the specified rating. When Reverse Voltage Protection has been tripped, an alarm tone will sound until the reverse voltage is removed. Under Voltage Protection will turn off the load when the voltage drops below a set limit. The Go/NoGo function is available to monitor test results all the time. When a test result goes beyond a preset limit range, a "No Go" indication will be shown on the display and a "No Go" signal can be sent out through the D-SUB interface for external device control. This Go/NoGo function is available for CC mode, CV mode, and CR mode. Under "Program" mode, 12 programs, each containing 10 panel setup memories, can be edited to create work routines for repetitive tests. After a program has been executed, the results of all test steps, along with the Go/NoGo judgments, will be shown on the screen. For external control and system configuration, the PEL series has USB and RS232 interfaces as standard and GPIB as an option. The LabView driver and Data Logging PC software are both supported for all the available interfaces. Each channel has an analog control/monitoring connector on the rear panel to externally turn a load on/off and to externally monitor load input current and voltage.